It was a memorable day for Gokhan Terzi on Sunday. He not only won the $50 000 Castle Tankard at Borrowdale Park with Rock The Country, he also saddled two more winners – Standpoint and Newton Power.

Rock The Country, bred by Hallmark Thoroughbreds and owned by Gengiz Goksel, was ridden by Hennie Greyling. The seven-year-old Western Winter (USA) gelding relentlessly mowed down the opposition when it seemed Mathematician had victory within his grasp.

The winning margin was 0.50 lengths with Windigo, third. Only a length separated the first three horses and Eurakilon, who was giving them all 3.5 kgs, 3.50 lengths off the winner. Flax, burdened with 60kgs, finished fifth, four lengths behind Rock The Country.

Locally bred horses won three of the seven races carded which was quite an achievement as they are now outnumbered by South African imports. Of the 79 runners on Sunday only 10 were bred in this country.

One of the most exciting finishes came in the fifth race, a 1700m Maiden Plate, when Standpoint, by Century Stand (AUS) and bred by Rumbavu Stud in Harare, got up to beat hot favourite Barbarian by 0.05 lengths. Full marks to jockey Lance Pagel for a sterling effort. Barbarian (ex Mike de Kock) looked set to make every post a winning one. 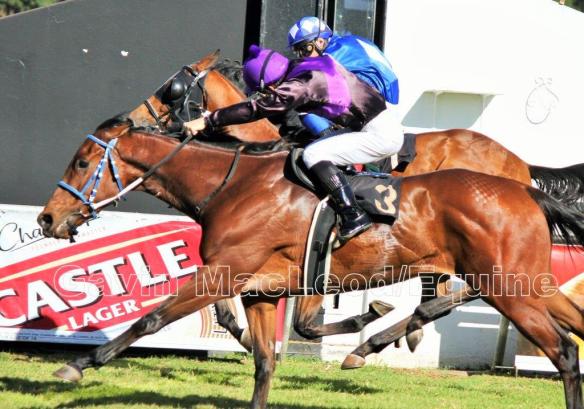 Amy Bronkhorst sent out two winners during the afternoon. Wylde Style, owned and bred by P.J. Moor in Zimbabwe, was an easy winner of the TBA Sales Stakes and later the Antonius Pius (USA) gelding, Perfect Grace, won the 1800m MR 70 Handicap for the Centaur Syndicate. Chase Maujean rode both horses.

Juan Paul van der Merwe had a winning ride on Newton Power in the 1200m MR 90 Handicap –another close finish involving Road To Dubai. Apprentice Calvin Habib scored on Aquaba for the Stidolph yard in the 1000m MR 55 Handicap.

The next Borrowdale Park race meeting is on Sunday, May 22, and features the Zimbabwe Oaks (L).