Lucky Sam and South African raider Warcraft finished within 1.25 and 1.50 lengths of Yer-Maan in the Castle Tankard on May 16. Then came Rock The Country (3.25 lengths off the winner), Equina (a length behind Rock The Country), followed closely by Yer-Maan’s stable mate Norgay.  Thriller In Manila, Super Trouper, Two Gun Kid and Menacing were further back.

Merhaba, Madigan, Got A Hold On Me and Say So Tiger complete this line-up but did not compete in last month’s Tankard.  The three-year-old Merhaba, winner of the Bloodstock SA 2000 (GR3) and the Zimbabwe Derby (GR3), must be in with a shout (stable jockey Apprentice Wesley Marwing rides the Mullins Bay gelding), and I never entirely discount Madigan, a former Triple Crown winner.  If he is in a galloping mood, carrying 52kgs, he could surprise.

Warcraft should be up there.

However the main focus is on who was what and where in the 2015 Tankard, and can the winner, Yer-Maan, and Quinton Riddle, score again?  This time the trip is 200m shorter and there is a turnaround in the weights. 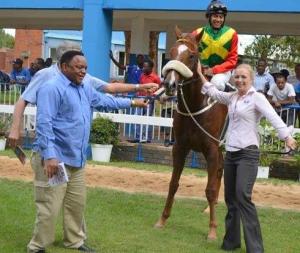 It would be easy to say that five-year-old Equina, the only mare in this race, is not the same horse she was last year, but her weight advantage can’t be ignored.  Ian Sturgeon rode her in the Tankard, and now Equina’s regular jockey, Karl Zechner, will be in the irons.

Lucky Sam and Warcraft put up a good fight in the Group 1 and are likely to repeat this.   However, at her best, Equina has to be very close to Lucky Sam.  In the 2014 OK Grand Challenge Equina, receiving 1.5 kgs, beat Lucky Sam by 1.25 lengths.  The Imperial Stride gelding turned the tables in the 1900m Republic Cup when he beat Equina by 2.50 lengths at level weights. On Saturday four-year-old Lucky Sam gives his rival 3.5 kgs  compared with 1.5 kgs on May 16. However, taking into account his recent form one could say he is now performing better.

Most eyes are going to be on Yer-Maan, who is a winner over Saturday’s distance, but others he has beaten before, such as Norgay, Super Trouper and Thriller In Manila, may prefer this shorter trip.

That said, Warcraft, Lucky Sam, Equina, and maybe Merhaba, seem to have most chance of spoiling Yer-Maan’s fun in what promises to be a very close race.  If the handicapper has got it right we can expect a wall of horses heading for a cliffhanger finish.  It should be great.

This is the last leg of Borrowdale Park’s Pick 6 which kicks off with a 1200m Maiden Plate with only 8 carded runners.  All of Aiiyayaii, Burg’s Overture and Promising have to be considered and, maybe, Alice.

In the second leg, a 1300m MR 55 Handicap, punters may require help from above.  Think about Maturin, Kirk Swanson’s trio, all the Spies horses, Vice Admiral, Agnetha and What’s Up Sarge.

Alyson Wright’s Muhannad (ARG) catches the eye in the next leg, a 1600m Maiden Plate.  Bachata and Anthony’s Lazer will also have supporters.  Confabulate’s last run could be too bad to be true but the Oracey (NZ) gelding is drawn wide here.

With the exception of Lane Geena and Chestnut Girl I would like to include every runner in the fifth leg, an 1800m Novice Plate.  One has to have Goose Green and Neptune’s Rock but it’s hard to leave out River Waltz (who may prefer further), and any of Zita, Rock Prince, Young Diplomat and Apple Tart could feature.  Princeton Tiger, a Kildonan colt, goes round the turn here for the first time.

Definitely this looks like another “killer” Pick 6 but you have to be in it to win it.  On May 31 the Borrowdale Pick 6 dividend was R107 330, with three Tote Favourites winning.