St John Gray’s Yer-Maan has triumphed in both the US$50 000 Castle Tankard over 2000m, and the US$ 40 000 OK Grand Challenge over 1800m. The six-year-old gelding, a son of Jam Alley (AUS), will achieve what no horse has done before if he collects first prize this time.

Zimbabwe’s Champion Jockey for the 2014/15 season, Quinton Riddle, takes the ride again and Yer-Maan is running off a Merit Rating of 106. Benchmark for the Republic Cup is 102, equalling 60 kgs. Yer-Maan will carry the stipulated top weight of 61 kgs, the remaining weights being at the handicapper’s discretion. This means most of those who met their formidable rival in the OK, i.e. Thriller In Manila (second, a length back), Rock The Country, Menacing, Norgay and Madigan, are now worse off by 0.5 kgs. Equina (fourth in the OK and 2.50 lengths behind) is 1,5 kgs better off with Yer-Maan; Two Gun Kid will receive an extra 1 kg, while Super Trouper is marginally better off by 0.5 kgs. 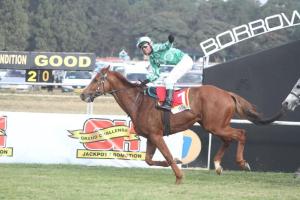 So far so good but three of the Republic Cup runners, Rushmere River, Gentle Brook and Diversify, were not in the OK Grand Challenge, although Gentle Brook met Yer-Maan in the Castle Tankard on May 16, finishing well down the field. With the good galloping weight of 52 kgs and Apprentice Martin Thackeray up, I am not going to discount Gentle Brook entirely.

The inclusion of another South African raider, Rushmore River, trained by Joe Somo, has given Zimbabwe’s punters something to think about. Owned by the Joostes, who also own Menacing, this is a horse who has raced with some of the best and not been disgraced. By Windrush (USA) the four-year-old gelding has won four races from 1600m to 1800m, but has yet to go further.

On January 14 at Turffontein in the 1800m Sea Cottage Stakes (L) Rushmore River ran third, four lengths off Louis The King at level weights. Five months later, with some good racing in between, he finished fifth to Legal Eagle in the 1800m Jubilee Handicap (GR3) (6.25 lengths back) with Judicial, Kalua Castle and Heavy Metal ahead of him. This was Rushmore River’s last start and, assuming he has travelled well, he has to be considered a main player.

The only time Yer-Maan and Rushmore River met was on November 15 in the 1800m Victory Moon Stakes won by Judicial. Rushmore River was fifth, 8 lengths off the pace, and Yer-maan a distant last. Obviously something was amiss that day so we can ignore this. On Sunday Yer-Maan will be giving Rushmore River 6.5kgs.

Merit Ratings in the Republic Cup range from 106 down to 70 with several of the runners in under sufferance. Rushmore River on 91 is second to Yer-Maan on 106, with Super Trouper on 89 and Equina on 86. However this is racing – and Borrowdale – so anything could happen. Personally I am really looking forward to this one.
Gokhan Terzi is responsible for four of these runners as he is still hosting Norgay and Yer-Maan. He remains upbeat and reports that Yer-Maan is very well and “jumping out of his skin”. So is Norgay, whom Gokhan suspects just might prefer 1600m. He believes Rock The Country, third in the OK, has to be respected and “should finish in the first three”. The gallant campaigner Super Trouper, now has his favourite partner, Brendon McNaughton, back in the saddle, and Gokhan says “I wouldn’t be surprised to see this horse upset the fancied runners on Sunday.”

In addition to Gentle Brook, Amy Bronkhorst sends out the sure to be well supported pair, Thriller In Manila and Equina. Thriller In Manila, 1.5 lengths in front of Equina (fourth) in the OK, is now 2 kgs worse off with his stable mate. This could be tricky, but expect a good performance from both. Karl Zechner rides Equina and Kevin Derere will be on “The Thriller”.
Seb d’Aquino will saddle Two Gun Kid, ridden by Hennie Greyling, and Kirk Swanson has entered Madigan and Diversify.

I will be watching to see how Diversify fares. The Parade Leader (USA) filly is out of a Fort Wood mare and has won twice over 2000m and been placed second over the same distance in her last three starts. She will be racing under sufferance, and this is a huge step up in class. However, you have to be in it to win it and the stable is in form. Francois Herholdt will be in the irons.

Unfortunately Lucky Sam is missing from the line-up so Bridget Stidolph’s only official runner is Menacing, ridden by Denicious Smith. I understand Rushmore River has been in the Stidolph yard since his arrival in Zimbabwe a couple of days ago.

This week Warcraft was scratched from the Republic Cup, due to an injury.

There are eight races on the Borrowdale card and the first is due off at 12.15.

The photograph, by Gavin Macleod, at the beginning of this post shows Super Trouper followed by Thriller In Manila, at the finish of the 1600m Ipi Tombi Stakes in March.