At present the pool of horses racing at Borrowdale Park can best be described as minimal so stables battle to meet the Racing Operator’s demands regarding acceptable field sizes. This inevitably results in seemingly unlikely runners sometimes being thrown into the melting pot.

The seven-race card for Sunday features the Commissioner General Of Police’s Charity Handicap over 1600m, as well as an 1800m Merit Rated 80 Handicap, and I have to wonder what the powers that be are thinking of. Everyone agrees the number of horses that can be called upon to race at Borrowdale is on the small side. Everyone knows the number of horses racing in the higher divisions is particularly limited.

Eight runners are carded for the 1600m Commissioner General of Police’s Charity Handicap and of these Tallie Two (third), Thriller In Manila (fourth), Super Trouper, Two Gun Kid and Merhaba finished behind Print The Pounds and Rock The Country in the 1800m ZNA Charity Handicap on October 4.

Gentle Brook, Principled Man, Got A Hold On Me and Jean’s Dancer complete this line-up.
At first glance Tallie Two, Thriller In Manila and Super Trouper are the pick but then we look at who is riding what, and then we have to ask why?


The in-form Gokhan Terzi fields four horses – Super Trouper, Merhaba, Principled Man and Got A Hold On Me. Super Trouper was set to carry the top weight of 62.5 kgs but will be ridden by Apprentice Norbert Takawira who claims 4 kgs. Brendon McNaughton teams up with Got A Hold On Me, and Francois Herholdt rides Merhaba. The last mentioned will now carry the most weight, 61 kgs, but in any event this Derby winner seems to prefer further.

Andrew Fortune, who was aboard Super Trouper last time out, goes with the Windrush (USA) gelding, Principled Man. This five-year-old won a 1200m MR 75 Handicap on September20 but has been placed at Borrowdale over more ground. I have to say, however, that it is only the Fortune factor causing thought.

In addition to Thriller In Manila Amy Bronkhorst will saddle Gentle Brook, also by Windrush, and ridden by Apprentice Mathew Thackeray, claiming 1.5 kgs. Fanie Chambers will ride the “Thriller” (60kgs).

My gut feel is to go with Tallie Two, Thriller In Manila and Super Trouper, but this is the “get out stakes” and I have been wrong before.

The ZRP Mashonaland West Province MR 80 Handicap over 1800m is due off at 14.45 and Terzi will saddle top-weighted Rock The Country and the bottom weight, River Waltz. Rock The Country, second to Print The Pounds over the distance on October 4, appears to be the horse to beat. Andrew Fortune rides the Western Winter (USA) gelding for the first time, and Brendon McNaughton is on River Waltz.

Kirk Swanson’s runners, Madigan, Diversify and Wee Doch ‘N Dorris, are interesting. Madigan got the better of Alyson Wright’s Zita over 1600m on September 6, and they meet again in this one. No change in jockeys as Apprentice Takawira rides Madigan again and Apprentice Ryan Munger remains on Zita. Sunday’s runner Say So Tiger could very well pose more of a threat to these two this time. 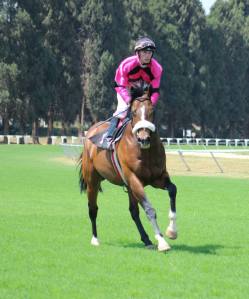 In the second race, a 1200m MR 65 Handicap, Romantic Balladeer and Nimble Dancer, both winners of their last starts, get the chance to prove their mettle in tougher company. One could make a case for the majority of this 12-horse field which includes Supa Challenge, Ebony Silver, Changa and Pente’s Daughter.

Arrowfield, Confabulate and Scarlett Ice stand out in the 1800m MR 55 Handicap. Those who want to go wider should include Maturin and Captain Grant who has to be dangerous with a light weight and claiming apprentice Marshal Bikausaru in the irons.

At the previous race meeting Master Of The Sky and Crew were placed behind Slick in an 1800m Maiden Plate and they step out again over 1600m on Sunday. Others to consider are Anthony’s Lazer, Expensive, Al Cobalena and Buck Up, while the Judpot (USA) gelding, Mitigate, will be making his Borrowdale debut.

Taken all round these are competitive fields so expect good racing and some surprises.
The Zimbabwe Republic Police will be out in force in support of their fund-raising race day and the first race is at 1 pm.