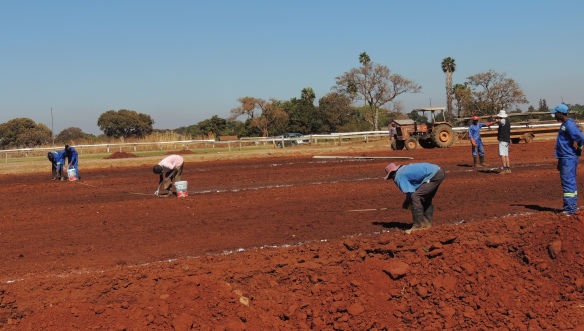 Racing resumes at Borrowdale Park on Saturday, September 10, and during the annual break some people have been hard at work. This week they began replacing turf on the new back straight – Gyles Dorward is overseeing this operation. We will race on what remains of the old back straight until the new turf is properly rooted.

You will be able to see the work in progress when you attend the first race meeting. Expect more dust than usual, and maybe some minor hiccups, but whining and cursing won’t speed things up. A start has been made on revamping Borrowdale Park!

ANOTHER MOMENT IN TIME…

…which Mashonaland Turf Club Chairman Christopher Peech (below) is not going to forget in a hurry.

Earlier this week the first  sods of turf went on to the new back straight at Borrowdale Park.