…where have all the fillies gone?

The Sable Flyers, main race at Borrowdale Park on Sunday, is a listed race for fillies and mares, benchmark MR 85 equalling 60 kgs, weights to be determined at the sole discretion of the Handicapper.

In 2015 this race, run over 1300m, was won by Pegwell Bay, followed home by Iron Lady, Gentle Brook, Tallie Two and Print The Pounds, and the eight runners had clocked up 32 wins between them. On Sunday the eight carded runners will compete over 1260m.  The field is made up of four and five-year-olds, whose score to date is a total of 12 wins, with Beretta the only maiden.

Carla The Rebel, a four-time winner with a Merit Rating of 67, will carry top weight of 60 kgs, and on previous form it is difficult to look past her. At the last meeting the daughter of Rebel King was fractious in the stalls and, as the start of the 1600m MR 74 Handicap won by Comanche Brave was effected, she dislodged Andrew Fortune. Undaunted Carla The Rebel took part in the race “on her own terms”, finishing in the first three, unofficially. Watch the race at here – Lance Pagel rides on Sunday. (Photograph courtesy Zimbabwe Equine News below)

Uptown Gal, by Miesque’s Approval (USA) is a lightly raced four-year-old having only had two starts.  In February she finished fourth to Domboshava over 1000m and her last race was on March 20 when she won a 1200m Maiden Plate, receiving weight but well clear of Cool Start and Go Galaxy.

Invincible Swan, also a lightly raced four-year-old, by Century Stand (AUS), won her last start over 1100m on June 19, beating Rebel Soldier. First time out on May 22 she finished third behind Comanche Brave (7.25 lengths back) in a 1200m Maiden Plate.

Your guess will be as good as mine but the facts are….Genial, drawn 7, and by Jay Peg out of a Captain Al mare, won her first two starts in KZN but hasn’t shown much in her last eight outings.  Her one and only start at Borrowdale was on July 16 when she finished 14 lengths behind Dirty Champagne in a MR 74 Handicap.  Genial could be anything and I like her breeding.

Ride Of Honour, a two-time winning daughter of Horse Chestnut, has not raced at Borrowdale before. The four-year-old had 15 starts at Turffontein and the Vaal and was often thereabouts. Her last start was at the Vaal on January 7 in a Fillies and Mares MR 68 Handicap over 1200m where she finished 5.15 behind the winner La Manga.

Relampago, by Toreador (IRE) quit the maidens in her only start at Borrowdale on September 10, finishing ahead of Fierce Prestige and Nemba Beach, with Sunday’s runner, Beretta, further back. Brendon McNaughton won on Relampago but goes with Beretta on Sunday.  Is that significant?  Only time will tell but I have to admit I am reaching!

Weights have been allotted at the Handicapper’s discretion and it will be interesting to see how he fares with this one.  Relampago will receive 6 kgs from Carla The Rebel, while Beretta, Domboshava and Invincible Swan will be 8 kgs better off.

On paper Carla The Rebel looks a possible Pick 6 Banker….but it could be tricky. 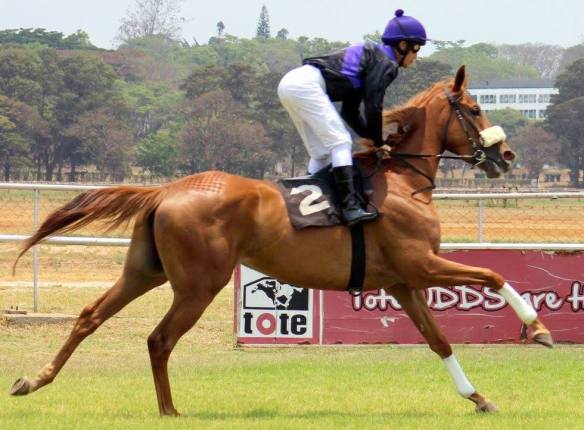