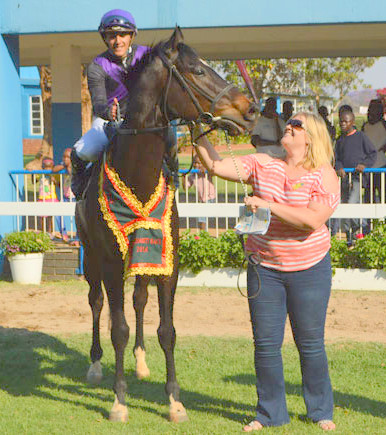 The Fisher yard won the feature race, the 1800m ZNA Charity Handicap, with Lava Flow, and also sent out the second horse, Call Me Earl.  Print The Pounds, Newton Power and Eurakilon followed.

Kevin Barry, also from the Fisher stable, was an easy winner of the MR 70 Handicap,  franking his equally decisive victory at the previous meeting in a 1700m Maiden Plate.

Bred by the Spotted Pig Stud in Zimbabwe and by Horse Chestnut, Kevin Barry is one to follow.  Brendon McNaughton was in the irons.

Kirk Swanson’s runner, Haga  Haga, disappointed his supporters here, finishing third, behind Devil In Command (second).  At the 300m mark Haga Haga appeared out of it, but ran on on well in the closing stages.

The Swanson stable began on a high note, taking the first race, a 1200m Maiden Plate, with first-timer Tierce.

Keagan de Melo was on board, and also rode a second winner for this yard when Perfect Grace flew past Standpoint in the closing stages of the 1700m MR 70 Handicap. (De Melo was in the irons when Lava Flow won the feature race…thereby earning the afternoon’s riding honours.)

The second race, an 1100m MR 70 Handicap went to the Gokhan Terzi-trained Porterhouse, who beat Swanson’s runner, Thriller In Manila by half-a-length.  Bankers  Blues  and Tandava, both Terzi runners, finished third and fourth.

Hennie Greyling, riding for Terzi,  scored for the second time on Fashion World, winner of the last race, a 1200m MR 55 Handicap, with stable mate,  Eurozone,  a close second.

Bridget Stidolph joined in the action when Bullion Bay narrowly beat the Fisher entry, Racey J, in the 1600m MR 50 Handicap. The Stipendiary report states: At approximately the 100m mark, the crop was accidentally knocked out of the hand of jockey F. Chambers, the rider of Bullion Bay.

Kevin Barry, starting at 10/1, was the longest priced winner in the Pick 6 races, but again there will be a  carryover.

I have no idea who compiles the tips appearing in the official MTC race card, but the only Pick 6 winner “he” failed to include among “his” selections for each race  was Lava Flow – and “he” did name Call Me Earl who ran second!

The penetrometer reading was 13 – please let it rain a bit – and the next Borrowdale Park race meeting is on Sunday, October 23, featuring the ZRP Fillies Charity Stakes.