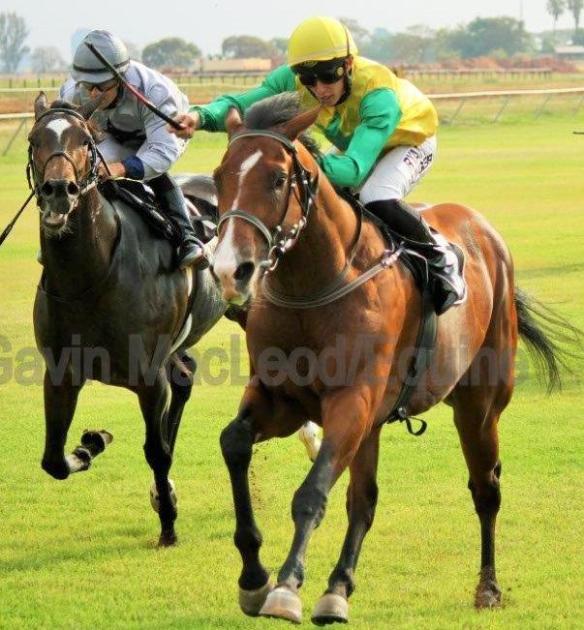 Ten of Zimbabwe’s most promising three-year-olds line up at Borrowdale Park on Saturday for the 1600m Tote Free Handicap, but the focus will be on the West Man filly, Wylde Style (60kgs), and Kevin Barry (58 kgs), a Horse Chestnut colt.

To date this pair have done everything asked of them. They clashed in the 1200m Jacaranda Free Handicap on November 6 where Wylde Style went down by a length to Kevin Barry when conceding 4kgs. On Saturday Wylde Style only gives the colt 2 kgs but has yet to prove herself beyond 1450m.

However one can expect natural improvement in this lightly raced field, several of whom have yet to go over 1600m.

This West Man (USA) filly has had 6 starts for 4 wins 1000-1450, and two seconds – to Rhythmical Reply over 900m and Kevin Barry over 1200m. No real reason to suppose she will not get the extra 150m in Saturday’s race. On July 31 in the 1450m Champagne Stakes Wylde Style, receiving 2.5 kgs, beat Rhythmical Rhythm by four lengths, with Shepparton and Haga Haga further back. Although she still gives the field weight in the Tote Free here’s hoping this gallant filly can live up to her well earned reputation. (Girl Power and all that.) Evert Pheiffer rides.

A Horse Chestnut colt and winner of 3 of his 4 starts 1200 – 1700. His second start and first win came in September in a 1700m Maiden Plate when, receiving 2.5 kgs, he beat Chum by 2.25 lengths. Since then Penny Fisher’s charge has won a 1200m MR70 Handicap for three-year-olds, beating Devil In Command, Haga Haga, Esprit de Corps and Rhythmical Reply convincingly. Next time out was the 1200m Jacaranda Free where he triumphed over Wylde Style. On Saturday the filly gives the colt 2 kgs rather than the 4 kgs she conceded in their last outing. Over 1200m I would give Wylde Style the nod…but Kevin Barry has a win over 1700m under his belt. Ryan Munger rides.

By AP Answer (USA) this gelding could show improvement over Saturday’s trip. He has narrowly beaten Wylde Style over a shorter distance but she has well and truly turned the tables in three subsequent meetings. However in the 1450m Champagne Stakes run in July he went down by four lengths to Wylde Style while conceding 2,5kgs. When they line up against each other on Saturday Rhythmical Reply will be receiving 5kgs from Wylde Style, which represents a very significant turnaround in weights. Billy Jacobson rides.

A Seventh Rock (AUS) gelding who recently won his first start and, judging by the Merit Rating, the handicapper was impressed. He won a 1000m Maiden Plate on November 6, finishing two lengths clear of Roberta’s Passion, who has to date raced three times for two second places. The fact that Jameson Run is in the race says quite a lot…he has shown someone something. Wes Marwing rides.

Great Britain (GB) colt with 6 starts from 1000m – 1200m for one win and three places. His win came in June in a 1000m Maiden Juvenile Plate where he finished in front of Whatsnewpussycat and Gimme Victory. Ran a two length second to Kevin Barry over 1200m on October 10, conceding 2.5 kgs. Perhaps he has been waiting for more ground. Jarred Samuel rides.

Main Aim (GB) filly, 6 runs for 1 win and 4 places 1000-1600. Ran third in first three starts up to 1100m then second to Rebel Soldier over 1600m. Next time out on July 31 won the Breeders Fillies Mile, beating Jinx Johnson by half a length at level weights. Has not raced since but is distance suited. Kevin Derere rides.

Fencing Master (GB) gelding came second to Haga Haga over 1100m in his first start and won over the same distance in September, beating first-timer Don’tfencemein. Finished 7.30 lengths behind Wylde Style over 1450m and last time out was behind Kevin Barry and Wylde Style in the 1200m Jacaranda Free. May prefer the 1600m trip and has weight on his side. Jockey TBA

Lightly raced Mambo In Seattle (USA) gelding who won his first start over 1200m, beating Megagram on July 31. In both subsequent outings he finished fourth to Kevin Barry over 1200m. On previous form Esprit de Corps and Haga Haga seem evenly matched – and hard to assess over 1600m.*Calvin Ngcobo (1.5) rides. Apprentice Allowance may be claimed.

Mullins Bay(GB) colt who has yet to show his paces over 1600m. Has run 5 times for one 1100m win and two places. Has finished third to Kevin Barry over 1200m when giving away 3 kgs but on exposed form it seems Haga Haga has quite a lot to do. However I continue to expect him to surprise. Keagan de Melo rides.

Tamburlaine (IRE) filly won her first start over 800m and this was followed by three distant seconds up the straight to stable mate Wylde Style. Was a close second to Golden Mystery in the Breeders Fillies Mile and now meets her on 1 kg better terms. Was 1.55 lengths off Finlay in a 1600m Graduation Plate on September 25, and fourth in a 1200m Novice Plate on November 6. Brendon McNaughton rides.