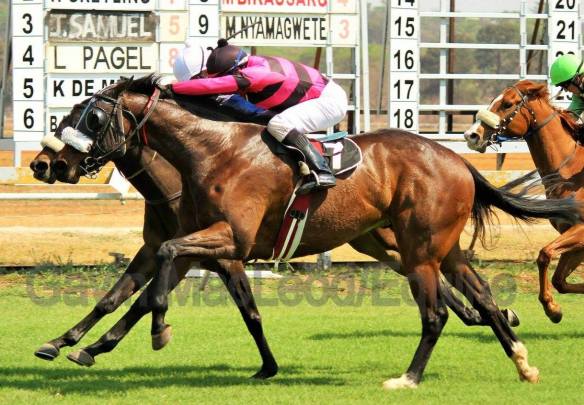 Staying races at Borrowdale Park are in short supply so when there is a 2400m event on the card it is quite exciting. Soon one is babbling about runners with 2000 m form – ignoring the fact that an extra 400m, especially in yielding going, is not to be taken lightly.

Of the nine horses carded for the 2400m MR 55 Handicap only Star Dance, Rawedge, Ladies First and Valmont have raced beyond 2000m. This is an opportunity for a genuine stayer to shine but, with little to go on, follow your heart or the breeding …or reach for a pin.

During a long career dating back to 2011 Star Dance has won three times over 2000m (twice at Borrowdale) and placed fourth over 2400m, behind Rawedge in soft going in 2014. Hasn’t been too prominent of late but may have been waiting for another chance to show his paces over more ground. By Jam Alley (AUS). Fanie Chambers rides, drawn 2, carrying 60 kgs. B. Stidolph.

Her two wins were over 1600m and 1700m but Ladies First ran sixth to Mathematician in the Zimbabwe Derby and fourth to Duffi’s Call in the 2000m Zimbabwe Oaks in 2016. Has staying credentials being by Silvano (GER), out of an Al Mufti (USA) mare. Randall Simons rides, drawn 1, carrying 59.5 kgs. A. Bronkhorst.

A winner over 1700m at the last race meeting Stirling Road has only gone beyond 1800m once, finishing well behind Lucky Sam in the SA Bloodstock 2000 when they were three-year-olds. By Judpot (USA), Stirling Road has won four races. Callan Murray rides, drawn 4, carrying 59 kgs. K. Swanson.

Two time winner over 1700m and 2000m. His 2000m win was on December 3 and that day Sunday’s runners Bullion Bay and Valmont were well held. When Star Dance won over 2000 m in June, Baumgartner, who was giving the winner 1.5 kgs, was more than 13 lengths behind. He receives 1.5 kgs from Star Dance on Sunday. Baumgartner has not raced over 2400m previously. By Black Minnaloushe (USA). Ryan Munger rides, drawn 5, 58.5 kgs. K. Swanson.

I often expect more from Rawedge than he actually delivers, however he has won over 1600m, beating Print The Pounds, and over Sunday’s trip! That was in a 2400m MR 70 Handicap in February 2014 when he finished ahead of River Waltz, Parade Prancer, Star Dance and Supa Challenge. His last outing was disappointing when 9.75 lengths behind Baumgartner over 2000m. He was giving the winner weight so might turn the tables here. By Ravishing out of a Jallad (USA) mare. Sherman Brown rides, drawn 7, carrying 58 kgs. K. Swanson.

I have been saying quite a lot about Baumgartner, maybe for no good reason, but Bullion Bay is one of Sunday’s runners that will be challenging him on better terms. The pair met in the 2000 m event won by Baumgartner and that day Bullion Bay was 2.25 lengths behind, receiving 1 kg. This time he receives 4kgs which should make a difference. The son of Bankable (IRE) has yet to run further than 2000m so this will be interesting. Brendon McNaughton, drawn 6, 54.5 kgs. B. Stidolph.

When Apprentice Habib has claimed Dictate will carry 53 kgs and this filly is by Silvano (GER). She quit the maidens over 1950m at Scottsville in June 2016 and has had four starts at Borrowdale. Of these the third outing, where she finished third to Phantom Major over 1450m, was the most impressive. * C. Habib (1.5) rides, drawn 9, carrying 54.5 kgs. B. Stidolph.

I was not going to take Chum too seriously because he has not featured since his 1800m Maiden win in November…maybe he hates yielding going. Now I am having second thoughts. There is no way I will omit a son of Ideal World (USA) from my Quartet so in he will go, regardless. Kevin Derere rides, drawn 3, carrying 52 kgs. K. Swanson.