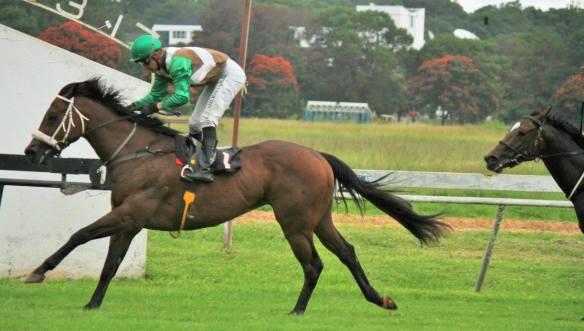 The second leg of Zimbabwe’s Triple Crown, the Bloodstock South Africa 2000 (Gr3), takes place at Borrowdale Park on Sunday afternoon. Only Guineas winner Flasher On The Run is in line for the “Crown” – providing he proves as efficient over 2000m as he has proved to be over 1600m.

Distance queries hang over most, if not all, of the runners in Sunday’s race. Silver Slipper winner, Solinski, the only filly carded for the Bloodstock 2000, has won over 1800m. The Flasher left the maiden ranks over 1700m, and so did Danger Dan. Megagram won an 1800m Maiden Plate in December.

Both the Guineas and the Silver Slipper were raced in heavy going and the chances are conditions will be firmer this time – which will help.

Thanks to the devastation of our local breeding industry, and the fact that most owners now look for a quick return when they shop, horses that stay are in short supply. The three Triple Crown races are run over 1600m, 2000m and 2400m, within a set time limit.

This suits the Classic purists among us, but filling fields is becoming problematic. Preparing three-year-olds for the Classics is also difficult in Zimbabwe due to the limitations of our restricted racing programme.

Kirk Swanson seems to have a strong hand with his trio, but only time will tell…

HAGA HAGA. Drawn 1. R. Munger. Kirk Swanson. 10 starts 2 wins 6 places. By Mullins Bay (GB) out of Brashee (GB) mare. Third to Wylde Style in the 1600m Tote Free Handicap, receiving weight, and won his last outing over 1600m. Has improved over more ground. Third in the Guineas behind Flasher On The Run and Wilde Style. 5.50 lengths behind the winner.

MEGAGRAM. Drawn 2. Brendon McNaughton. Bridget Stidolph. 10 starts 1 win 7 places. By Tamburlaine (IRE) out of a Sobieski (USA) mare. Won 1800m Maiden Plate on December 18, beating In The Oven, Danger Dan and Aloft. Second to Haga Haga over 1600m on February 5. Finshed fourth in the Guineas, 6.75 lengths off the winner.

DANGER DAN. Drawn 6. Fanie Chambers. Bridget Stidolph. 8 starts 1 win 5 places. By Dan De Lago (AUS) out of a Marauding (NZ) mare. Plenty of experience around the bend and won his last start over 1700m, beating Supalumina by two lengths. Finished 1.25 lengths behind Megagram in a 1800m Maiden Plate on December 18.

ESPRIT DE CORPS. Drawn 4. Randall Simons. Amy Bronkhorst. 6 starts 1 win 2 places. By Mambo In Seattle (USA) out of an Elusive Quality (USA) mare. Won his first start on July 31, narrowly beating Megagram, with Danger Dan further back. In two subsequent starts over the same distance Esprit de Corps finished fourth to Kevin Barry. Next raced twice around the turn ( 1600m and 1700m) where he did not distinguish himself, and on March 12 finished well back over 1260m in a MR 50 Handicap won by Temple Run. No doubt this was a prep run. Hard to assess.
SOLINSKI. Drawn 3. Callan Murray. Kirk Swanson. 4 starts 2 wins 2 places, By Fencing Master (GB) out of a Sobieski (USA) mare.This will be Solinski’s fifth start and she won the 1800m TBA Silver Slipper at the last meeting. Prior to that she finished within 0.75 lengths of Wylde Style in the 1600m Fillies Classic. The daughter of Fencing Master (GB) has also won over 1200m, beating King’s Wager and The Catcher.

Photograph: Flasher On The Run and Sherman Brown triumphed in the Zimbabwe Guineas. Sherman rides again on Sunday.