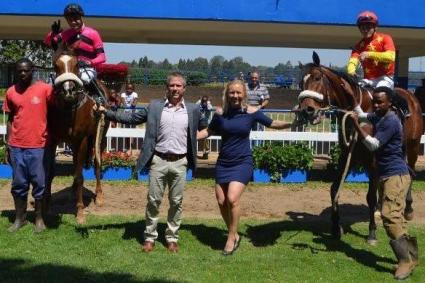 Three winners on the 7-race Borrowdale Park card on September 23 came from the Stidolph stable.

Bush Pilot (Calvin Habib)  above, left,  and his stablemate Twilight Trip (Collen Storey) were both fancied in the 1200m MR 75 Handicap. Only 0.10 lengths separated the two in an exciting finish, with Bush Pilot, by Judpot, getting the verdict. This was Twilight Trip’s Harare debut and the Tellytrack presenter decided this Trippi gelding was one for his notebook.

Bred by Varsfontein Stud, Bush Pilot is a fairly recent arrival in Harare. He is owned by Scott Buchan, Neil Evans, Ash Dixon, Ryan Sherwood and Bridget Stidolph. Congratulations to all the connections. 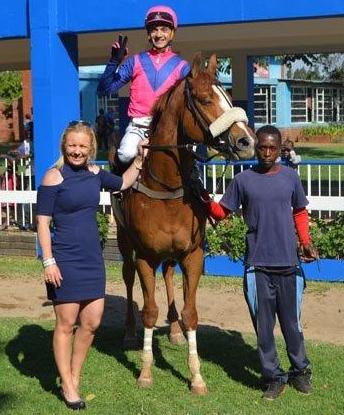 Next up was Pampas, owned by Newbury Racing (Pty) Ltd (nominee: Dennis Evans), in the 1600m Graduation Plate. The Silvano (GER) gelding finished with style, finishing 1.50 lengths clear of Hillah The Hun.

Pampas has now won three and been placed twice from 12 starts. He was bred by Maine Chance Farms and, once again, Calvin Habib had the winning ride.

The last race of the day was the 1100m MR 60 Handicap won by Kilowatt Kid (Habib) from Cool Solution, Cotton Rock and Switchblade.