Earlier this week I said Saturday’s 1800m ZNA Charity Handicap might not be all about Simona, Roman Discent and Heir Line – and, believe me, there are some jokers in this pack.

In addition to Simona and Roman Discent, the Stidolph yard will also be represented by Bush Pilot and Twilight Trip. This pair distinguished themselves at the last race meeting, by providing a cliff-hanger finish over 1200m with 0.10 lengths separating them at the wire. Bush Pilot is nearest the camera in the photograph above.

Carrying 63kgs he got the verdict from his stable companion who was receiving 3 kgs.

It was Twilight Trip’s first outing at Borrowdale Park. This five-year-old gelding is by Trippi (USA) out of a Jet Master mare. Previously based at Kenilworth, he has 3 wins (over 1600m and 1700m) and 10 places to his credit from 16 starts. Brendon McNaughton will ride at 53 kgs.

By Judpot out of a Badger Land (USA) mare, Bush Pilot has had three starts in Harare, winning two races here over 1700m and 1200m. His two victories in Gauteng were over 1600m but the five-year-old gelding has been placed up to 2000m.

Morgan Nyamagwete, who partnered Bush Pilot when he ran third to Heir Line in the 1900m Republic Cup, will be in the irons. Set to carry 56.5kgs this time, Bush Pilot is marginally better off with Heir Line here.

The Fisher stable fields Knuckleball and Lava Flow – and neither needs to be introduced to Borrowdale Park punters. 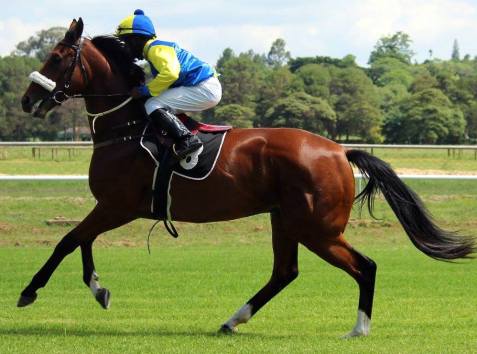 Knuckleball (above), a four-year-old gelding by Curved Ball (AUS), ran second in the Zimbabwe Guineas, then won both the Zimbabwe 2000 and the 2400m Zimbabwe Derby last season. He has won 5 races and been placed 8 times from 13 starts.

Francois Herholdt rides at 54.5 kgs on Saturday. Knuckleball will prove just how good he is if he shapes up in this company.

Last but certainly not least is Lava Flow (below) – a seven-year-old Western Winter (USA) gelding who has won five and been placed 19 times from 46 starts.

And never forget that Lava Flow, on 52 kgs, won this race in 2016, finishing 2.50 lengths clear of Call Me Earl, Print The Pounds and Newton Power, from whom he was receiving 2.5 kgs.

He fluffed his lines in the Republic Cup, finishing 7.10 lengths off the winner but, prior to that was placed in each of his nine starts, from 1600m to 2400m. This included a win on April 29 (the day Knuckleball won the Derby).

On that occasion, Lava Flow beat Heir Line by half-a-length over 1800m when receiving 5kgs.

Lava Flow is set to carry 52 kgs in Saturday’s ZNA Charity Handicap but Hennie Greyling is likely to put up an extra kg. Even so he will be receiving 7 kgs from Simona, 5kgs from Heir Line, and 4 kgs from Roman Discent.

Only the brave will drop Lava Flow from their Quartets.