Almost every race at Borrowdale Park on Sunday includes at least one runner who featured at the last race meeting so it’s tempting to assume they will keep up the good work. This certainly applies in the main race, the US$ 8 000 Springvale House Sable Flyers (L).

Gentle Brook, second to Casey’s Dance in the 2014 Sable Flyers, carries top weight again. The distance of this race for fillies and mares has been increased from 1200m to 1300m, which doesn’t rule out Gentle Brook, but stable companion, Pegwell Bay, could very well be the main danger.

On September 6 both mares ran in the 1000m AFZ Charity Borrowdale Sprint won by Approval Rating, where Pegwell Bay, 1kg better off with Gentle Brook, was a close second. On Sunday Gentle Brook, who finished midfield last time out, will be giving Pegwell Bay an additional 3kgs.

Randall Simons rides the six-year-old Windrush mare so Gentle Brook looks to be the stable elect, but this weight turnaround makes one wonder.

In addition to these two fancied runners Amy Bronkhorst will also saddle Flamingo Lily, Supa Dupa and the maiden, Swinging On A Star. Flamingo Lily, by Sail From Seattle (CAN), has won over 1200m and 1600m. With Apprentice Stalon Sawere up, the five-year-old filly will only carry 48kgs. Unfortunately Flamingo Lily will only come into the reckoning if she goes into the stalls, which she is sometimes reluctant to do.

What makes this event really interesting is the return to racing of last season’s champion three-year-old filly, Print The Pounds, and her rival, Tallie Two. Both came into their own when racing over 1600m and beyond, although Tallie Two shed her maiden certificate as a juvenile over 1100m.

Hard to assess how they will handle this trip but, there were similar doubts when 2013 Triple Tiara winner Casey’s Dance ran in the Sable Flyers, and she won.

The plucky Var mare, Iron Lady, completes this line-up and we can safely assume her trainer, Kirk Swanson, hasn’t entered her for fun. With 52kgs on her back she must be considered even though she too has won from 1600m to 1900m. Do not leave her out of your quartets.

Alyson Wright fields It’s By Jingo and Zita in the third race, a 1600m Graduation Plate. Quinton Riddle rode both horses at the September 6 race meeting, and retains the ride on It’s By Jingo who led from start to finish in a 1700m Merit Rated 55 Handicap.

Zita, however, was very impressive when second to Madigan in the 1600m Merit Rated 75 Handicap and a repeat performance will make him hard to beat. This time Apprentice Ryan Munger rides.

The Count Dubois gelding, Flintstone, returns after a long rest and, like most of this field, could make the placings.

Nimble Dancer, from the Stidolph yard, not only surprised when winning a 1000m Maiden Plate at the last meeting, he looked like a champion in the making. The AP Answer colt takes on the likes of Wat’s Up Sarge, Romantic Balladeer, Pente’s Daughter and Princeton Tiger in the 1100m Merit Rated 60 Handicap so now has a great deal more to do.

Pente’s Daughter won the 1200m Merit Rated 50 Handicap on September 6 and her new owners will be hoping for a quick double here. 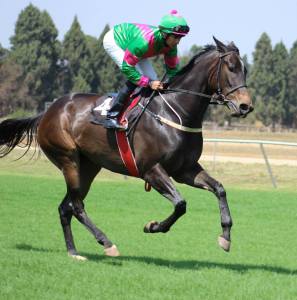 Pente’s Daughter with Randall Simons up.

Bankers Blues, won the 1600m Maiden at the first race meeting of this season, beating Bachata by two lengths. In Sunday’s 1800m Merit Rated 60 Handicap he has a host of likely contenders to deal with, such as Sido, Confabulate, Arrowfield and Maturin. Once more Andrew Fortune teams up with Bankers Blues.

Bachata is probably the most consistently placed horse in training at Borrowdale. The Mambo In Seattle (USA) gelding steps out again in a 1700m Maiden Plate and perhaps this will be his day.

Seb d’Aquino sends out five of the 10 runners, including Thunder Fury, Expensive and Galactic Hero, while Gokhan Terzi tosses in a Black Minnaloushe filly, Scarlett Ice, who races for the first time in Harare.

Skipping through the card in non-consecutive order has let me ignore the first and last of the seven races on the card – and I would be happy to do so.

The meeting kicks off with an 1100m Maiden Plate and of the 14 runnners Master Of The Sky, Go Galaxy and Buck Up seem the obvious choices. However, Almighty Hood started favourite at the last meeting and his performance was probably too bad to be true. He has to be given another chance and there are also several first-timers.

Last race of the day is a 1200m Merit Rated 75 Handicap where Chestnut Girl, with Randall Simons up, is going for a hat-trick. She has to beat Amas Amat, Got A Hold On Me and Gotago – and then there is Final Fling who has been out of sight since July 2013. 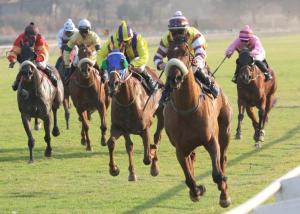 Chestnut Girl is trying for a hat-trick.

This son of Gharir won his first start over 1200m and then went on to take the 2012 TBA Champagne Stakes over 1200m, beating Monterey Bay by 3.50 lengths. He was second to Newton Power in the 1450 Tote Free Handicap but went off the boil in subsequent races around the bend.

Not many horses return to racing after a two-year layoff. Final Fling must have been showing someone, something.