The five-year-old daughter of Jay Peg, Pegwell Bay, took the 1300m Sable Flyers (L) from Iron Lady at Borrowdale Park on Sunday. Andrew Fortune was in the irons and during the afternoon he guided three of his mount’s into the Winners Enclosure. 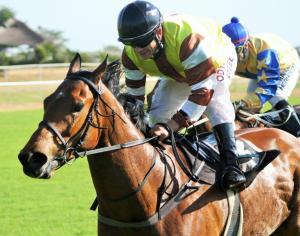 Pegwell Bay, out of a Fort Wood mare and bred by Normandy Stud, is owned by Peter Moor and trained by Amy Bronkhorst. She was Tote favourite and her stable companion, Gentle Brook finished third, followed by Tallie Two. Print The Pounds was fifth.