In addition to winning the main race on Equina, Quinton Riddle also scored on Pente’s Daughter.

Brendon McNaughton visited the Winner’s Enclosure three times with Nimble Dancer, Got A Hold On Me, for the Terzi yard, and Master Of The Sky.

Two of the visiting jockeys, Andrew Fortune and Fanie Chambers, had to settle for one winner each.

McNaughton and Nimble Dancer (above) completed a  hat-trick when the AP Answer colt won the 1100m Merit Rated 75 Handicap. Trained by Bridget Stidolph,  and bred by Clifton Stud, the colt is owned by Messrs S.N. Buchan, N. Evans,  S. Mawdsley, K.J. Mullen, K. Smith, M.K. Chant – and Bridget Stidolph, who was having a particularly good afternoon.

The four-year-old Jetmaster gelding, Master Of The Sky (below), put it all together in the  1100m Maiden Plate which he won in fine style, finishing clear of first-timer Cool Solution. He is owned by Julie Zieve and John Koumides and was bred by Patricia Devine Investments (Pty) Ltd.

This was Bridget’s third winner, having previously saddled Maturin who won with Chambers on board.

Gokhan Terzi sent out the winners of the third and fourth races.   First up was Sky (below), a three-year-old filly by Warm White Night out of a Jallad mare. She skipped away from the field in the 1700m Maiden Plate, having  previously been placed in her three starts up the straight. It seems Sky prefers more ground.

Andrew Fortune rode for Terzi and the filly is owned by Gengiz Goksel and was bred  by Mr M. J. Reid.

Got A Hold On Me then won the 1800m Merit Rated 85 Handicap, followed home by Say So Tiger,  Rock The Country (his more fancied stablemate), and Two Gun Kid.

As well as winning the main race of the day, the Champion Fillies Stakes, with Equina, Amy Brokhorst trained Pente’s Daughter who triumphed in the 1300m MR 55 Handicap. 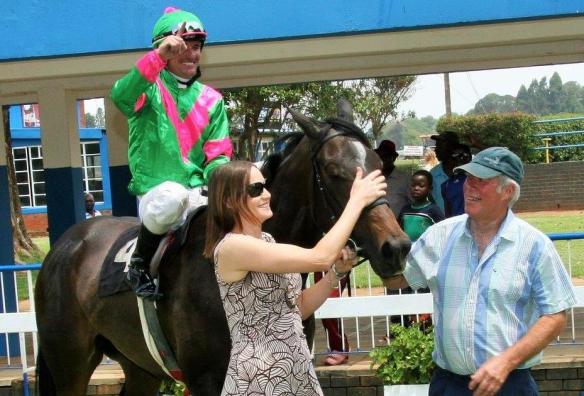 This was a tight finish with Pente’s Daughter getting the verdict from Shezawarrior by 0.05 lengths.

The daughter of Argonaut is owned by  Jane Howes and Karl van Laeren  (above) and has now won 3 races.  She was bred by Mr C.H. Gregson.

The next race meeting at Borrowdale Park is on Saturday, November 28, and features the prestigious US $ 13 000 HRIB Gold Cup which is run over 1200m.

And TV viewers at home and abroad  will be able to watch without  getting frustrated. New camera equipment is being installed  in time for this race meeting – which will greatly improve our window onto the world.