ANOTHER GOOD DAY FOR TERZI

Saturday proved to be a very good day for the Terzi stable. They saddled the winners of the first four races at Borrowdale Park, including Dirty Champagne (below), who went for, and got, his fourth successive victory in the 1200m MR 75 Handicap. Lance Pagel was aboard and the close finish involved The Mutineer, Nimble Dancer and Super Good. 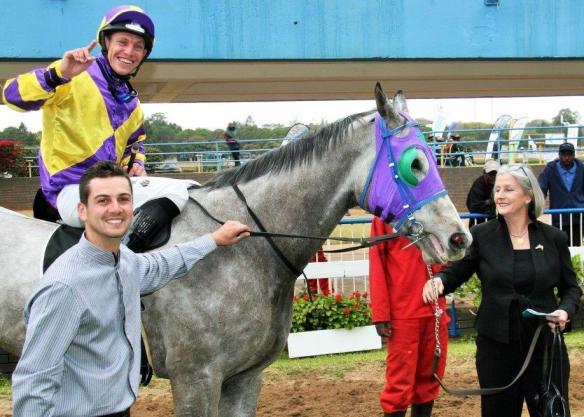 Dirty Champagne, a five year old gelding by Var (USA) out of a Lecture (USA) mare was bred by Milkwood Stud. He is owned by Messrs T.J. Shawe, G.G. Terzi and G.V. Woodruff.

The two-year-old Gharir colt, Rebel Soldier, running in the colours of the late Patricia Wakefield, Pat Devenish, Mike Eaton and Ron Mhizha, won the 1600m Maiden Plate  – seems like he was waiting for some extra ground. 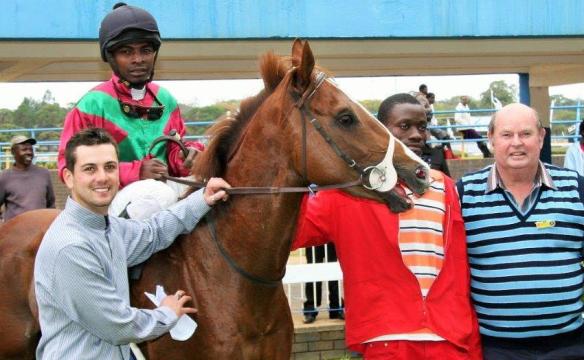 COMANCHE BRAVE ADDS TO HIS SCORE

Effert Pheiffer and Comanche Brave came back to an enthusiastic welcome after triumphing in the 1600m Novice Plate. Trained by Amy Bronkhorst, this was the Kahal (GB) gelding’s fourth start here – his tally in Harare being two wins and two second, so far.

The three-year-old gelding is owned by Duncan Jones, Adrian Nydam and Steve Shutt. Looks like one to watch out for in future. He was bred at Summerhill Stud.

THE DESTROYERS – QUICK GLANCE AND *BIKAUSARU

The son of Mogok (USA), a six-year-old, has now won 9 races. He was previously with Corne Spies but has been owned by Jannie Blignaut for some time.