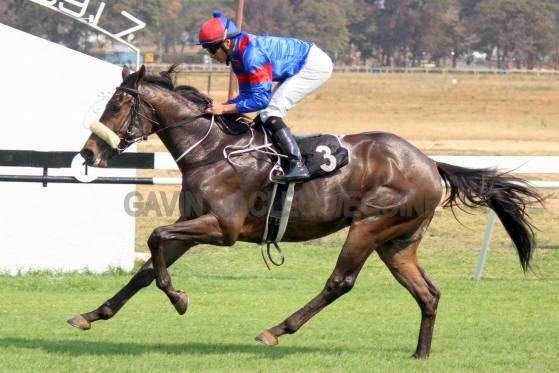 Peggson, by Jay Peg, with Randall Simons up.  Deon Sampson rides on Saturday.

The Tote Free Handicap, for all three-year-olds, run over 1600m, will not necessarily provide insight into the 2018 three-year-old Classics. In the Classics the contestants will meet at set weights – in the Tote Free they meet according to the handicapper’s assessment of performance, so far.

However, I have to admit that in 2015 and 2016 the handicapper was spot on as far as winners of this race were concerned.

Of the seven due to line up at Borrowdale Park on Saturday, Flanders, Champion Juvenile Male 2016/17, and winner of four races, will carry top weight of 60 kgs. He will be giving 0.5 kg to Peggson who has beaten Flanders over the distance by four lengths, and 2kgs to stable mate Butchie Boy, who finished two lengths behind Peggson that day.

Peggson certainly has the credentials but his stable companion, Knuckleball, also has some claims. The son of Curved Ball won over 1600m at the last meeting and prior to that ran four lengths off Peggson over 1700m. They met at level weights then, but on Saturday Knuckleball carries 54 kgs to Peggson’s 59.5 kgs.

As for the rest of the runners this will be their first attempt at the mile. Recent import Soaring High, by Windrush (USA), is a very dark horse indeed. He has a Merit Rating of 71, will carry 58 kgs and has won once and been placed once, from four starts in Gauteng.

The two locally bred horses, Edward The Seventh and Silver Buck, are also difficult to assess. These lightly raced stable mates have both won over 1200m but step up in class now – albeit it with some weight on their side.

On previous form around the turn Amy Bronkhorst has a strong hand with Peggson and Knuckleball, but the Stidolph pair, Flanders and Butchie Boy, cannot be ignored. Of course I am always prepared to be surprised and only hope Tellytrack  gives this race the attention it deserves. We are racing on a Saturday, which has in the past proved dicey as far as TV coverage is concerned.